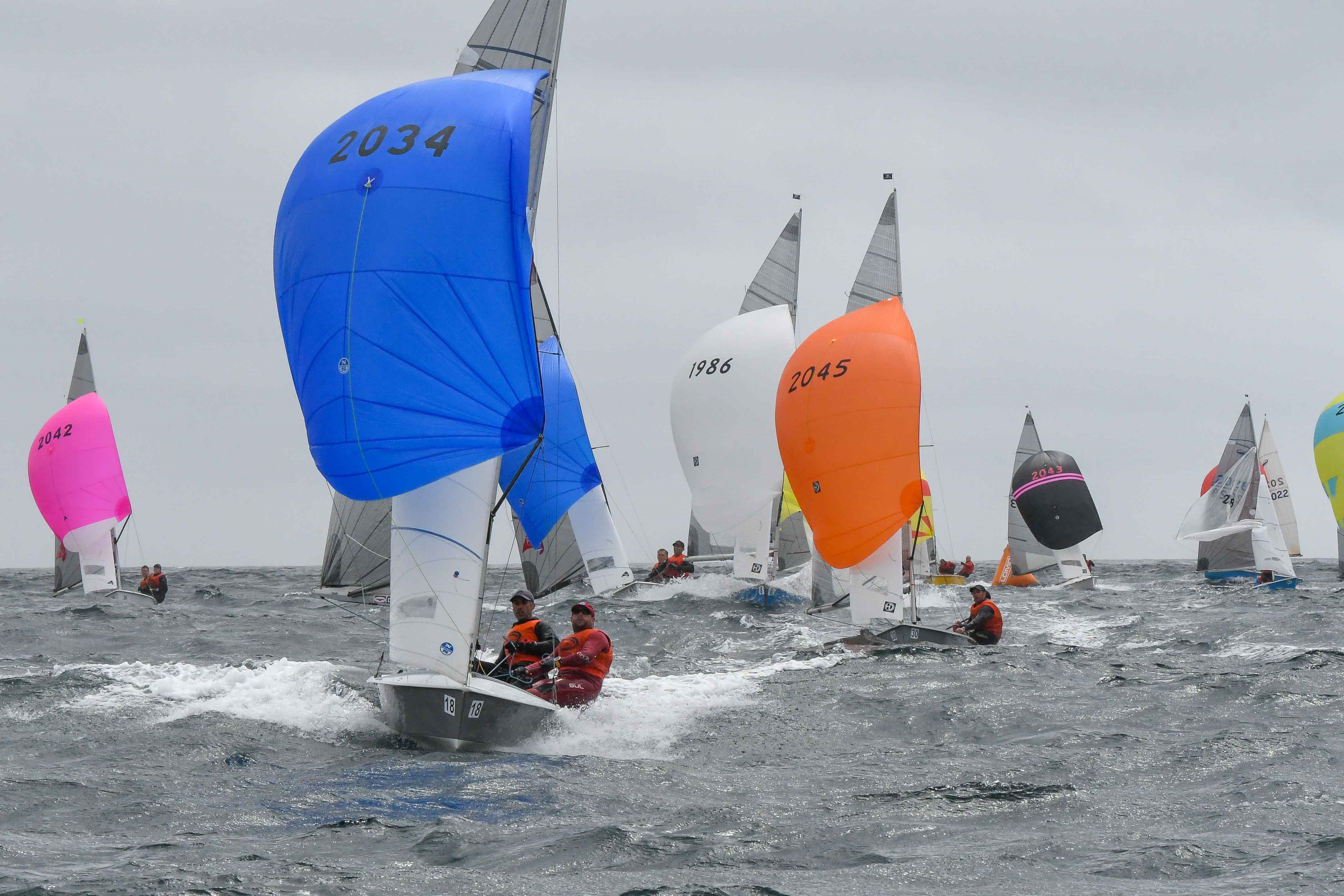 Sunday was a tough day at the office. The 71 competitors, who had passed registration and scrutineering with flying colours, ventured out with trepidation to the race course to face a packed day of on the water activities in a stiff 25mph SW with occasional showers.

After a practice gate start, the fleet started a much needed practice race with a number of competitors taking the opportunity to have a swim, including Tom Lonsdale abandoning Emily Cole-Evans mid tack.

Steve Walker and Jerry Hannabus (2044) bravely opened the gate with no guard boat, but the fleet behaved themselves and were evenly spread.  Tom Gillard and Rachael Grey led round the first mark, hoisted and extended – never to be caught. Us mere mortals were left to battle the perfectly set triangles that were ready to catch out any mistakes. This included the jury boat chasing Vince Horey & Rob Gardiner waving a little red flag and Nigel Wakefield and Pasty spectacularly failing their first hoist and swimming.

The final scores on the doors were;

The wind didn’t abate for the second race with the late starting fleet choosing to let the pathfinders, Baz and Oli Fellows, battle the elements on their own for the first minute.  A late port lift let Alan Krailing and Si Forbes lead the fleet in from the left followed by Tom & Rachael. The Scorpion showed its seaworthiness to its full potential in the rolling Mounts Bay swell, but it was a depleted fleet that made it to final finish line, the last gybe claimed some noticeable names. A fast-finishing Vince & Rob rounded off the podium climbing up from 6th at the 1st mark

The Penzance SC safety team were amazing and didn’t come off the water until all competitors were safely ashore with beers and pasties. A number of us were grateful for our sponsors, Typhoon and Craftinsure’s products

Tonight’s social is the Isle of Sheppey Race night where we will be joined by the Scorpion Wives, Husbands, girlfriends and gender neutral support crews (SWHAG) fresh back from their sponsored lunch for an evening of fun.